The NEVMUG Summer Slam is just 1 week away! 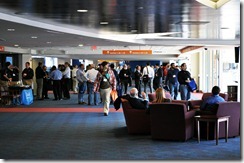 It was about 6 months ago that I was writing about the NEVMUG Winter Warmer.  It was my first VMUG and it was great.  For a free conference / user group, it was packed full.  The presentations were great, the sponsors had great break out sessions, and the conversations with attendees were inspiring.

Now it’s time to do it all over again, this time in Maine.  On Thursday, July 19th, the Virtualization Technology User Group will be presenting the New England VMware User Group Summer Slam in Brunswick, Maine.  The day will be filled with vast amounts of knowledge transfer via keynotes (including one by Chris Colotti of VMware), break out sessions (which will feature speakers such as Mike Foley, Ed Haletky, and Luigi Danakos), and the sponsors EXPO.  Once it’s all said and done, there will be a giant lobster bake over at Gritty’s.

I’ll be walking around, taking photos (and live tweeting a few for those of you who can’t make it), and taking in all that the NEVMUG has to offer.  I’ll also be heading up the night before, so if you want to grab a late drink and some food, hit me up on twitter.  For more information about the NEVMUG Summer Slam, go to the VTUG website.