San Francisco is an amazing city (and also an expensive city).  I finally was approved for travel to this city after trying the past two years, so I wanted to make it count.  I had heard so many great things about VMworld from years past and I was looking forward to all it had to offer before, during, and after the show.  With only a few days in the city and a lot to accomplish, my adventure began on saturday.

Saturday night kicked off the first VMworld activity (if you don’t count booth assembly or hanging in the alumni lounge).  Simon Seagrave hosted a spectacular vBeers event to kick things off and it was packed the the point it was spilling out on to the sidewalk.  I met a lot of really cool people (including several people I follow on twitter) and I even got to try out google glass (I need to find one that fits people with glasses).

The next day started off with some sight seeing and a bit of a walking tour of SF.  Google maps really need to start telling me about elevation changes because some of those streets were straight up (or down depending on the direction you were going)!

Sunday afternoon was home to the 4th (or 5th depending on who you ask) vOdgeball tournament and this year did not disapoint.  My understanding was that this was the biggest it has been and major props to the teams competing, the refs for making quick calls, and the fans for surviving stray balls.

While team EMC was victorious in winning, the real winners was the wounded warriors program who received around $14,000 in donations.

That evening we witnessed the opening of the show floor.  I have to say, the EMC booth was amazing and was one of 2 double decker booths on the show floor.  It seemed like every time I was at the booth it was packed full of people and this is always a great sign.  After 3 hours of booths, beer, and food, it was time for the biggest social media meet up of the week.  I’m referring to the VMunderground party.  This year it was held at an art gallery (that was surprisingly vacant of art) and had plenty of room to talk, eat, and mingle. 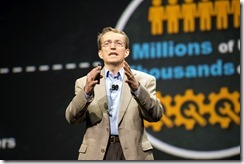 All this has happened and the show doesn’t even start really until Monday morning.  The opening keynote delivered by former EMCer Pat Gelsinger did not disappoint.  Major announcements about the release of vSphere 5.5 which included two new features: VSAN and NSX.  VSAN is VMwares take on software defined storage and NSX is the result of the Nicira acquisition last year and completes their software defined networking portfolio.  There are plenty of great blogs out there discussing these technologies and I can’t wait to see what is done with this technology down the road. 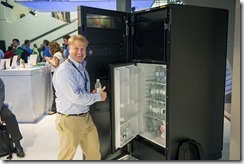 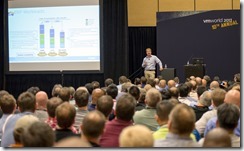 At the EMC booth, Chad Sakac didn’t disappoint either.  He has a way with words and seems to be able to fire up the crowd no matter where he is.  Of course it helps when you have goodies to wow people like a VMAX that has a fridge built into it.

Tuesday provided even more information about the new technologies announced the day before.  It was also a great day to do hands on labs.  VMware provided a huge hands on lab area, but for people wanting to try out EMC specific labs, we also brought our own booth setup to handle several labs at a time across the entire EMC portfolio.

Tuesday night was the vendor parties and EMC, Cisco, and Intel banded together to bring you Cloudfest!.  We took over Ghirardelli square to bring the ultimate combination of music, food, and chocolate.  As evidence by the photo to the right, this place was packed!  The bands were great and delivered some amazing covers of popular songs by Queen, The Police, and others.  I was told this was one of the best parties of the night and people were still talking about it up through the end of VMworld.

On Wednesday, the EMC booth had a t-shirt meet up.  Everywhere you looked was a sea of EMC datacenter hero shirts (I think there were more than at EMC World).  This was the final day the show floor was open and even after 3 days of presentations, booth attendance was still very high (including some special guests like Pat dropping by).

That night was the VMworld Party.  They took over AT&T park and turned it into a c

ounty fair!  The midway games were great however I still maintain that they were rigged since the same people kept winning (and I won nothing).  Both Train and Imagine Dragons did a great job.  This has to be one of the best customer appreciation parties I have been to and I can’t wait to see what happens in the coming years as other events step up!

All in all VMworld was a great event.  I met more people than I can remember (including about half of the people I follow on twitter).  I learned a lot about upcoming technology and the solutions they play.  To see the full collection of my photos (all 154 of them) I have posted them to google+. 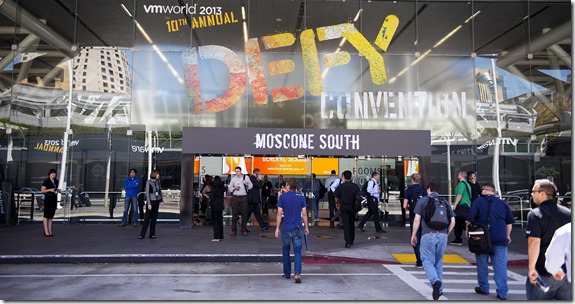