This blog is not dead yet! 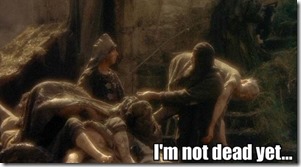 This post goes out exactly 1 year since my last post, and on this anniversary I want to make the statement that this blog is not dead yet, it’s just been in hibernation.  Writing has always been a struggle for me, dating back to my child hood.  I took great pride in what I had accomplished on this blog, not just in giving back to the community, but in being able to put together a regular cadence based on an activity I find challenging at times.

You’ve been gone for a year, what has happened?

So yes, over the course of a year a lot can happen and I’ll try and cover it at a high level.  Shortly after my last post, we underwent some changes on the team I worked on..  I inherited the responsibilities of the EMC Elect program from the departure of my close friend Matt Brender.  With the continued help and investment from Mark Browne, we kept the momentum going and finished judging and announced the elect class of 2014.  The program has continued to expand in size year over year.  With the addition of Dennis Smith to the team, we plan to continue this growth next year and beyond!  Nominations are currently open for EMC Elect 2015!

I found that these added responsibilities combined with my increased travel schedule and my existing initiatives did not leave me a lot of time for blogging, so unfortunately it fell by the wayside.  I know that some may say that is just an excuse, but while some people may be able to blog quickly, I end up staring at a computer screen for a long time struggling to get the words down.  The time just wasn’t there when I could be using it for other things (like moving to a new home).

Why are you back and what can we expect?

That is another good question.  I’ve been seeing all sorts of inspiring things going on around me that get me wanting to blog again.  Recently,  I’ve seen friends participating in a 30 blog posts in 30 days initiative.  I’m no wear near ready for that, but I do want to be able to do that someday.  I also am turning my life around personally.  I’m going to be setting up a new home office / workspace and expanding / revamping my home lab.  I think those will inspire some great blog posts.  My current role within EMC affords me a wealth of information.  Since I’ve taken over the responsibilities of EMCs blogging program (at a high level), I should lead by example and write about what we’ve been disseminating to our blogging corps.  I appreciate the 100 or so people that visit this site each day, and I hope to increase that number with new content.  I hope you are all looking forward to this as much as I am.