In just one weeks time, 15,000+ people will descend on Las Vegas and the Sands Convention Center for EMC World 2013.  While I can’t wait for the show to start, I wanted to highlight a few things that you may not know about, but will definitely make your show experience so much better.

Front and center during this year’s show is the EMC Square.  This mecca to all things social (and it may or may not be a perfect square) will house EMC TV, Silicon Angle, the EMC Backstage (more on this later) and the all new Blogger’s Space.  The Blogger’s Space (formally the Blogger’s Lounge) will be where bloggers such as myself can meet to talk, share ideas on the white boards, relay screens to watch keynotes, and of course  internet access to blog.  Inside the Blogger’s Space is a special area for EMC Elect members.  Elect members will have their own area to converse and I’m also told there will be special Elect ONLY blogger briefings during the show.  If you are a blogger and you are attending EMC World, make sure you register here.  I will be spending most of my time here and at the ECN booth, so be sure to stop by and say hello.

This year the social media team will unveil an all new Buzz Board.  This new interactive display will pull in tweets, Facebook posts, pictures, videos, and more about EMC World.  Simply tag things with #EMCWorld and watch them populate in near real time. 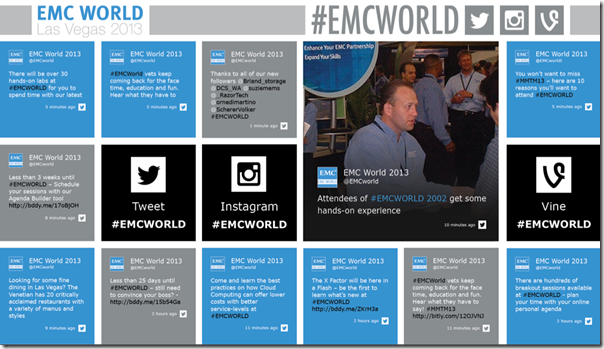 Last year we had Buzz Sessions, Quick 10 – 15 minutes sessions highlighting a multitude of topics (including one staring yours truly).  This year we decided to slow things down a bit and introduce EMC Backstage.  After every keynote, we’ve invited the speakers to come sit and answer questions.  If there was something you wanted to know more about during the keynote, now is your chance.  Simply tweet your question with the #EMCBackStage hashtag and the moderator may ask it during the session.

The Hands-on Labs are always a highlight of the show.  It’s the best place to try out all sorts of product demos and get a real feel for things without having to play with your production system.  It’s also rumored that this year you will get a chance to try out some unreleased products through the hands on labs

I know my friend Craig “Chappy” Chapman was looking for good music this year, so I can’t wait to hear the final playlist.  The Hands-on Labs tend to fill up fast, so your best time to participate is first thing in the morning.  There should be little to no wait then.

With everything that goes on during the day at EMC World, what are you going to do at night?  Well on Wednesday is the customer appreciation event.  Just like last year, there will be another big name performer.  Guest passes are already sold out, so I hope you got one if you were going to bring a friend.

But what are you going to do the other few nights?  That is where we have you covered.  On ECN you can find a list of all the official and unofficial meetups going on during the week.  There will be a party on Tuesday night in the Zebra Lounge for ECN Members.  This party requires a wrist band, so be sure to see me to get one.  I haven’t figure out how I’m going to award them, but I’m always wanting to meet readers of my blog.

Where you’ll find me

My time at EMC world will be split between taking photos (be sure to follow me on twitter as well as @EMCCorp to see them) and booth duty.  On Monday you’ll find me at the ECN Station for most of the evening.  Tuesday and Wednesday mornings will be spent at the Elect Lounge.  I will be taking photos of all the keynotes (I believe another team mate will be taking photos of the general sessions).  Outside of that I’ll be at various meetups and events.  If you want to meet up, just tweet me and I’ll tell you where I’m at!