The New England VTUG – A view from the other side

For the past few years I have attended several New England VTUG/VMUG events as an independent blogger / technologist.  This year, I attended the 10th annual Summer Slam as a sponsor through my employer and it has given me a little bit different a perspective on things.  My goal this event was to promote awareness of the EMC Community Network and the EMC Elect programs and have a conversation about it.  I do believe that I achieved my goal, but I also came away with a few big takeaways for next time. 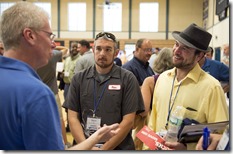 For those of you who haven’t attended the New England VTUG, it is held in the high school of Brunswick, Maine.  The main vendor hall is in the gymnasium, a room with no wired internet and shared power cords.  One must be prepared because this remote location also does not lend itself very well to cellular signals (probably good for keeping the kids focused on schoolwork). The result of this is that both vendors and attendees would heavily rely on the wifi network, and after it hit full saturation, performance problems would occur.  This also meant that there was no fall back for hotspots and mifi units.  It became quite apparent that I had miscalculated when I was the only one trying to do live demos that required internet connectivity.

I cannot stress this enough.  It is very hot, and in the summer the AC is not on in the school (with the exception of the theater), so a fan will be your best friend.  Vendors can use this to their advantage too.  If you want to get everyone to come to your booth, give your patrons a way to cool off.  The two most popular booths were giving away smoothies for attendees (competitors too) to drink and it was much appreciated.

All these fans however caused another issue … with the power.  When you run several fans (and a blender) off the same circuit, you may overload it.  And we did … twice!  The NEVTUG staff was very attentive to get extra power cables run and reset the circuit breakers so that downtime was minimal.

Be Happy! Be Social! 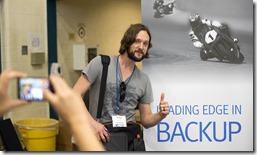 To be honest, the majority of the attendees I spoke with had never heard of ECN or the EMC Elect.  However when I spoke to them, many were very receptive and enthusiastic about the idea.  One of the moments that really stood out to me was when a customer indicated that he was the goto person in his organization for everything, and he often did not know the answer.  After I explained to him about the support forums on ECN, he lit up and responded “This is where I can get the answers!”  Its genuine engagement like this that makes these user group meetings worth while.

Lets do it again

I had a blast talking to customers, partners, and even a few competitors at the NEVTUG.  With news coming of a new VTUG chapter forming in Silicon Valley (and more in the works across the united states) I urge all my readers to attend one and have a great conversation.