It has been less than a week since the Google+ Pilot launched and already people are getting hooked. Blog posts have popped up all over the place comparing this to Facebook, MySpace, and even Google wave. I will be doing none of that since I have never used any of those services.

If you are lucky enough to get into Google+ (and if you did, I hope you have me in your circle), you will notice the “less is more” style of layout. It a very simple 3 column approach. On the left you have your different circles (more on that later) and your chat. On the right you have, contacts you know, suggested contacts, and the ability to start a hangout (again more on these things later). The middle is your stream, and depending on who you are following, it can get a little crazy at times.

Google+ breaks down your connections into circles. As far as I know, you can have as many circles as you want. This allows you to group your friends and coworkers into different sections and restrict your posts. Adding a person to a circle is a simple drag and drop action. With this all setup, I can post something only to my close friends or family, without it going to everyone I know at work with. This provides a great amount of flexibility, and of course you can always post to all your circles or make something public for everyone to see. Like twitter, adding someone to a circle does not require an approval, however if they don’t have you in their circle, you won’t see any of the non-public posts. Also like twitter (or rather tweet deck), tagging someone in a post is as simple as typing a ‘+’ or ‘@’ and then typing out their name. 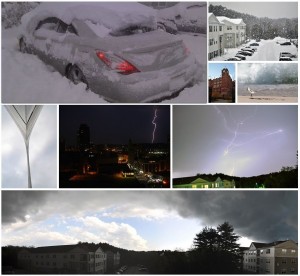 Photos are handled by Picasa, which should come as no surprise since it’s owned by Google. Depending on how many photos you have in an album, Google+ will arrange them in a nice mosaic as seen in the picture to the side. Photos can be included into posts in your stream and other Google+ members can be tagged as well as leave comments. This all seems like very standard stuff, and it is, but Google’s presentation seems to be very slick and is appealing to me.

The hangout is a way for members of Google+ to communicate through video chat. Hangouts, just like posts, are controlled by circles, so you only invite those you want. The video is all done through flash but the quality isn’t as good as Skype yet. What it does bring to the table is a web based video experience that allows for multiple people to talk together in a group, this feature is something Skype makes you pay for.

The other major section is Sparks. This is a sort of themed subscription area. You can use it to find public posts related to any sort of topic you search for. It will then create a stream filled with posts, stories /articles, YouTube videos, and other things that Google thinks is related to your inquiry. I haven’t played around too much with this feature yet because there aren’t a lot of public posts (this is expected in a limited field trial), but I expect this feature to be used a lot more in the future.

Google has also included an android app for this. This allows you to see your stream, manage your circles, make posts, and upload your photos directly from your phone. A word of warning, when you first install the app, it’s going to ask you to auto publish every photo you take. I suggest you say no to this. The app has the same simple UI that the webpage does, though not as feature rich. Clicking on someone’s name in a post does nothing at this point, where in the web version you can find info about them. I would like to see an iPad app as the mobile web interface is even more lacking.

With all these features, there are still a lot of kinks to be worked out. There seems to be no integration with anything non Google at the moment. I would love to see a post to twitter option, or a WordPress plugin to post to Google+. The task bar at the top will launch a new window when you click on anything outside of Google+ and then another one to go back in. At one point I had 7 windows of Google+ opened because of this. The hangout does not handle widescreen cameras that well. The image of a friend was squished / stretched to match the standard aspect ratio.

So how does one get invited to Google+? It’s simple, you need to know someone. On the first night, Google opened up invites to anyone a member chose. There was a simple button to include an email address. This however disappeared in several hours, but a second method has been discovered. This is detailed in a blog post by Susan Beebe and I have used it to invite several people. If you want me to try and invite you, leave your email address in the comments.

So, if you couldn’t tell, I like the service. I think it still has a way to go, but I’m told that Facebook and others started off small too. It has some great features and has the Google branding to help make it a great competitor. At this point only time will tell weather this is here to stay, or goes the way of Wave.