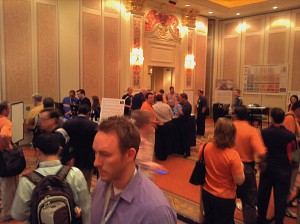 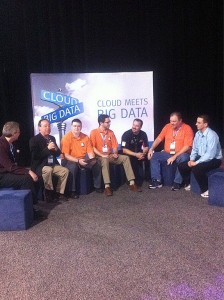 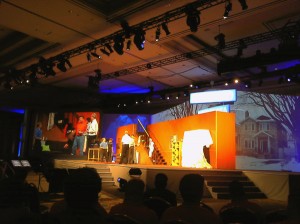 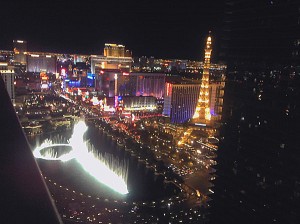 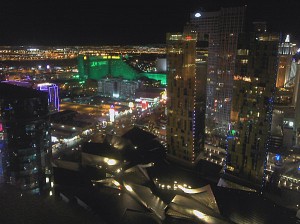 So I have been in Vegas for a little more than 24 hours. I have done a lot of walking around, I have won some money, I have met up with many of my twitter friends, and I also got my first taste of EMC World.  For those of you who may not know, this is my first tech conference, and I plan to get as much as possible out of it.

Today I learned my first valuable conference lesson: Wear comfortable walking shoes. Today I chose to wear a flat bottomed skater-style shoe. This was a bad choice and by lunch time I was already in the Walgreens buying a set of Dr. Scholl’s inserts. I may try a different kind of shoe tomorrow, but if my feet are hurting this much already, who knows what tomorrow will be like.

It was great to meet up with everyone. After having an amazing breakfast, we met up with Thomas Jones. He joined us on a trip around Las Vegas as we went all the way to Mandalay Bay to pick up our interop badges. After finding out the roller coaster at New York New York was closed, we made our way back to the Venetian because it was time to register for EMC World.  In a matter of minutes, I bumped into Chad Sakac, Len Devanna, David Hurst, and Jeramiah Dooley.

It was then finaly time to start the conference off right. For EMC employees, we were treated to a short presentation from Jeremy Burton on the company message and what to expect from EMC World. This was also where I mett Dave Henry and Mark Twomey for the first time. Then it was time for the pool. I didn’t realize just how big the pool area was, but I got lost for a while. Eventually, I met up with everyone, including Kelly Lavin, Denny Cherry, Julia Mak, Cody Bunch, and Edward Haletky. This great group of people will make this conference even better. I’m not even 1 day in and I’m loving every minute of it. See you on the show floor!

If you couldn’t tell, I do almost everything technology related with Matt Brender and Luigi Danakos. People have dubbed us the 3 Musketeers and I think the name suites us well. I waited until now to talk about this because I am officially confirmed with flights, hotel, and passes to EMC World and Interop.

Our plan to get to EMC World started at the end of last year’s show. Both Matt and Luigi won a chance to be a part of the event. I however, being brand new to EMC, was not able to attend the show in Boston, but I did network at the after parties. Nevertheless, I still wanted to be a part of the fun and excitement next year. New York, Paris, or Milan, we had decided we were going to make our way to the show.

“You’re not pre sales or a customer, how did you get there?”. I’ve been asked this question more than once, and while the details are a bit classified, I can say this. The idea of sending us to EMC world has been talked around for several months now. Once we purchased our flights and hotel rooms, we ramped up our campaign. Well, we caught the attention of the right people who also agreed that we should be there and made it happen.

“So what are you going to do there?”. In short, everything I can. I plan to make multiple rounds of the show floor, checking out everything our departments and partners have to offer. I will also be a part of the bloggers lounge, observe some breakout sessions, and make my way to a few keynotes as well. Last year Luigi had a twitter shirt signing going on and if he’s going to do it again this year, I may join him. So look around for me on the show floor and make sure you say hello.