Its been a while since Matt and I teamed up to do another installment of the I Tech Therefore I Tool Around Podcast.  With EMC World right around the corner, we decided to preview the upcoming event!  Being located near the EMC Headquarters has it’s benefits, and one of those is that many people were in town working on projects for the show.  We invited two vSpecialists Jase McCarty and Dave Robertson to join us in talking about the show.

In this podcast we talk about several different subjects revolving around EMC World.  We started off by talking about the vLabs, what went into them last year, and what we can look forward to this year.  Jase is going to be head of operations this year at the vLabs and will be the man to make sure things get done.  Dave has been up here working on a VMAX VSA that will be used as vLab demo this year.

Next we moved on to Project R.A.M.P.  Matt takes us through the first big public result of his new role at EMC.  For those of you who don’t know, Matt has transferred from Engineering to the Social Media team here at EMC.  As of this blog post, Project R.A.M.P has gone live on the EMC Community Network but there will be mission for those attending EMC World.

New this year are BUZZ sessions.  These short 20 – 30 minute gatherings are modeled after the TED Talks and will encompass a variety of subjects.  Matt, myself, and several of the support forum legends will be having a BUZZ session on Wednesday, May 23rd @ 10:30 AM PST.  Be sure to join us both in person and online (more on that later).  In addition to the buzz talk, you will find myself and several other ECN members at the EMC eServices / Social Media booth and around the show conducting interviews and reports.  And be sure to come check out the Bloggers Lounge and catch up with other bloggers.

While at this years show, be sure to visit the EMC Proven Professional area where they are offering 50% off the price of exams.  The show floor will always have some great swag to give away, so be sure to bring an extra bag to fill up.  Closing out the show this year will be another live episode of Chad’s World as well as a special concert by Maroon 5!!!!!!!  I look forward to seeing as many people there again this year. 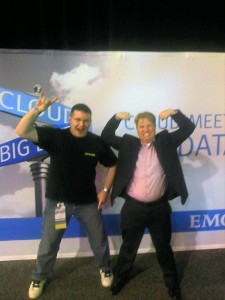 So another day has wrapped up here at EMC World. Once again there are more keynotes, breakout sessions, and vendor booths to explore. The vLabs were in full swing and just about all of the kinks had been worked out. These are a great way to experience the products if you can’t make it to the break out sessions. If you attended multiple vLab sessions, you were able to win a special bobble head Chad and possibly get the real Chad to sign it. 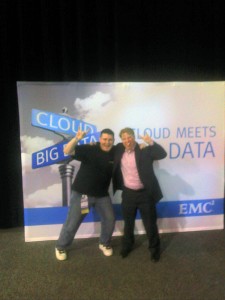 We were told that this could withstand a bullet, but they wouldn’t let me live test it, so I’ll just have to take their word for it.

The bloggers lounge and Social City was also packed with great people. I had a nice talk with Chuck Hollis while he was working on a few blog posts. Chad dropped by the social city meet-up area to do a live webcast before rushing off to another customer meeting. If you haven’t seen all that’s going on at social city, you really need to check it out (and possibly win a pass to next year’s show). Don’t forget, tomorrow we are having the #nerdherd, so I expect you all to stop by social city on your way to lunch.